Understanding the impact of bacterial infections in causing pre-cancerous lesions 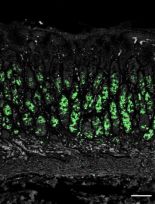 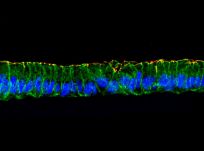 Electron microscopy analysis of H.pylori infecting a gastric cell in a mucosoid culture

The WHO has reported that infections are the cause of one out of five cancer cases in the world. Many of these are related to viruses (HPV, EBV, HCV and others) but there are increasing evidence that also bacterial infections can cause cancer [1, 2].  The strongest epidemiological association has been reported for Helicobacter pylori that is considered responsible for 70% of the gastric malignancies and indeed the WHO has classified H.pylori as class I carcinogen.

How does the infection cause cancer? What is the molecular link?

Since the initial discovery, the impact of H.pylori infection has extensively been modelled using cell lines or  mice. The first model has an intrinsic problem: cell lines are derived from tumours and they are already the endpoint of the process that we want to investigate. The second model is certainly more complex but the clinical outcome of the infection in mice covers only the initial steps of the disease progression. H. pylori is a human restricted pathogen and it does not cause cancer in mice. To cover the gap between these two models we have harnessed the stem cells of the stomach to reproduce a functional epithelial layer in vitro. We have evolved the so-called “organoids”[3, 4] in a more sophisticated system that we call “Mucosoid Cultures"[5]. The mucosoids have most of the features of the real gastric mucosa: they can be kept in culture for years and they have the unique capacity of producing gastric acid, digestive enzymes, and an abundant mucus layer, which enables infection studies in a physiological condition, using human healthy cells.

During infection, two opposite forces are reshaping the architecture of the tissue: bacteria are causing extensive tissue damage while the gastric epithelium reacts by regenerating the cells. The result of this perturbed equilibrium is that the epithelium changes its shape during disease progression: some of the typical cells are lost (the one producing acid) and new types of cells will appear. The specific aim of your project is to generate mucosoids from early precancerous lesions of the gastric epithelium. You will analyse the genetics of the precancerous cells to understand their regenerative potential compared to their normal counterpart. You will investigate the specific host factors involved in re-shaping the epithelium and their influence on the stem cells; further, you will try to understand the role of the infection and inflammation in the regulation of those factors.

All students at the Ludwig institute are provided with training in all aspects of scientific development and are integrated into a highly interdisciplinary and collaborative environment. We expect you to be an active part of this community and to promote scientific exchange with your colleagues. You will work in a small enthusiastic group and you will be directly supervised.

You will be trained in using a wide range of advanced 3D culture systems. 3D culture technologies are still poorly diffused and you will have the unique opportunity to learn the cutting-edge methods. You will learn how to manipulate pathogens (H.pylori) and how to work in a biosafety level 2 laboratory. Most of our readouts are based on imaging and you will become proficient in confocal microscopy and image analysis. Further, you will learn cell sorting, qPCR and transcriptomic analysis.

After acquiring the basic knowledge in stem cell biology, microbiology, gastrointestinal anatomy, immunity and cancer biology, you will be able to develop your own critical thinking. By the end of your program, you will drive your project more autonomously and you will develop new ideas for future scientific projects or applications.

Although bacteria have long been associated with human cancer, drawing causal relationships has been difficult. In this issue of Cell Host & Microbe, Scanu et al. (2015) provide evidence for a transforming activity of Salmonella Typhimurium on predisposed host cells, which can subsequently form tumors in a xenograft model. Hide abstract

Infections are estimated to contribute to 20% of all human tumours. These are mainly caused by viruses, which explains why a direct bacterial contribution to cancer formation has been largely ignored. While epidemiological data link bacterial infections to particular cancers, tumour formation is generally assumed to be solely caused by the ensuing inflammation responses. Yet, many bacteria directly manipulate their host cell in various phases of their infection cycle. Such manipulations can affect host cell integrity and can contribute to cancer formation. We here describe how bacterial surface moieties, bacterial protein toxins and bacterial effector proteins can induce host cell DNA damage, and thereby can interfere with essential host cell signalling pathways involved in cell proliferation, apoptosis, differentiation and immune signalling. Hide abstract

The recent advances in in vitro 3D culture technologies, such as organoids, have opened new avenues for the development of novel, more physiological human cancer models. Such preclinical models are essential for more efficient translation of basic cancer research into novel treatment regimens for patients with cancer. Wild-type organoids can be grown from embryonic and adult stem cells and display self-organizing capacities, phenocopying essential aspects of the organs they are derived from. Genetic modification of organoids allows disease modelling in a setting that approaches the physiological environment. Additionally, organoids can be grown with high efficiency from patient-derived healthy and tumour tissues, potentially enabling patient-specific drug testing and the development of individualized treatment regimens. In this Review, we evaluate tumour organoid protocols and how they can be utilized as an alternative model for cancer research. Hide abstract

BACKGROUND AND AIMS: Helicobacter pylori is the causative agent of gastric diseases and the main risk factor in the development of gastric adenocarcinoma. In vitro studies with this bacterial pathogen largely rely on the use of transformed cell lines as infection model. However, this approach is intrinsically artificial and especially inappropriate when it comes to investigating the mechanisms of cancerogenesis. Moreover, common cell lines are often defective in crucial signalling pathways relevant to infection and cancer. A long-lived primary cell system would be preferable in order to better approximate the human in vivo situation. METHODS: Gastric glands were isolated from healthy human stomach tissue and grown in Matrigel containing media supplemented with various growth factors, developmental regulators and apoptosis inhibitors to generate long-lasting normal epithelial cell cultures. RESULTS: Culture conditions were developed which support the formation and quasi-indefinite growth of three dimensional (3D) spheroids derived from various sites of the human stomach. Spheroids could be differentiated to gastric organoids after withdrawal of Wnt3A and R-spondin1 from the medium. The 3D cultures exhibit typical morphological features of human stomach tissue. Transfer of sheared spheroids into 2D culture led to the formation of dense planar cultures of polarised epithelial cells serving as a suitable in vitro model of H. pylori infection. CONCLUSIONS: A robust and quasi-immortal 3D organoid model has been established, which is considered instrumental for future research aimed to understand the underlying mechanisms of infection, mucosal immunity and cancer of the human stomach. Hide abstract

OBJECTIVE: causes life-long colonisation of the gastric mucosa, leading to chronic inflammation with increased risk of gastric cancer. Research on the pathogenesis of this infection would strongly benefit from an authentic human in vitro model. DESIGN: Antrum-derived gastric glands from surgery specimens served to establish polarised epithelial monolayers via a transient air-liquid interface culture stage to study cross-talk with and the adjacent stroma. RESULTS: The resulting 'mucosoid cultures', so named because they recapitulate key characteristics of the gastric mucosa, represent normal stem cell-driven cultures that can be passaged for months. These highly polarised columnar epithelial layers encompass the various gastric antral cell types and secrete mucus at the apical surface. By default, they differentiate towards a foveolar, MUC5AC-producing phenotype, whereas Wnt signalling stimulates proliferation of MUC6-producing cells and preserves stemness-reminiscent of the gland base. Stromal cells from the lamina propria secrete Wnt inhibitors, antagonising stem-cell niche signalling and inducing differentiation. On infection with , a strong inflammatory response is induced preferentially in the undifferentiated basal cell phenotype. Infection of cultures for several weeks produces foci of viable bacteria and a persistent inflammatory condition, while the secreted mucus establishes a barrier that only few bacteria manage to overcome. CONCLUSION: Gastric mucosoid cultures faithfully reproduce the features of normal human gastric epithelium, enabling new approaches for investigating the interaction of with the epithelial surface and the cross-talk with the basolateral stromal compartment. Our observations provide striking insights in the regulatory circuits of inflammation and defence. Hide abstract