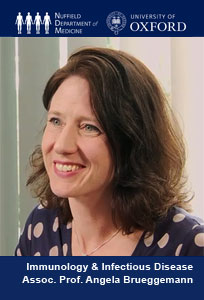 Associate Professor Angela Brueggemann first developed an interest in medicine and biology as a child but it wasn't until later that she decided that she wanted to be a scientist. She studied Biology at St Olaf College, USA and after completing her undergraduate degree, Angela took up a research post in clinical microbiology at a large, teaching hospital in Massachusetts, USA.  It was here that she found she enjoyed the freedom of research to develop her own ideas.   She then studied for a Master’s degree in epidemiology before moving to Oxford to pursue a DPhil in molecular epidemiology.

"It was a very non-traditional career route but that was not a bad thing. The intervening period of research between my undergraduate and DPhil degrees was very productive and I learned a lot about science and doing research."

"I came to Oxford to undertake my DPhil with Professor Brian Spratt, as infectious disease epidemiology was my key research interest."

She was awarded a Wellcome Trust Career Development Fellowship in 2008, which enabled her to become an independent researcher.  She now is a Group Head in Experimental Medicine, researching how pneumococcal populations evolve in response to vaccines and antibiotics.

Angela has found that NDM has been "extremely supportive" of her research career and that other senior researchers in the University of Oxford have been able to offer guidance when needed.

"NDM has been really supportive of my research career in all sorts of ways. I think that having a mentor at various stages of your career is important."

"Professor Rodney Phillips has been a fantastic mentor, helping me to steer some of the ideas that I have and supporting me as a scientist."

Angela believes that the "flexibility" of a research career enables her to achieve a good work/life balance and that seeing other successful women balance their careers with family responsibilities was really inspiring, especially when she first returned back from maternity leave.

"My husband and I have two young children aged 5 and 2, and we both work full time, which certainly has its challenges. Having a work/life balance with a young family is hard work but incredibly rewarding and our boys help us to put everything else in perspective. I am also fortunate to have a partner who is really supportive of me and my career."

"Seeing other women with children manage a very successful career was really inspiring - for example having Angela McLean as a mentor really helped me navigate those first few months/years with a young family."