"My vision is to see an effective malaria vaccine made freely available to the poorest communities in rural Africa. I hope to remain in Africa, working to develop solutions to pertinent health issues facing the continent, and training the next generation of researchers to carry the mantle." - Professor Faith Osier, Pathogen Vector and Host Biology, Centre for Tropical Medicine and Global Health, KEMRI-Wellcome Trust. 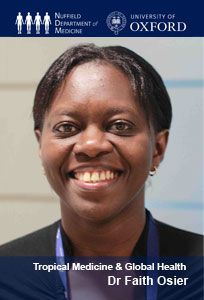 It was during her general paediatric training in Kenya that Visiting Professor Faith Osier first realised how little was known about human immunity against malaria. This experience not only gave her a greater appreciation for the difficulties involved in developing an effective vaccine against malaria, it also sparked her passion for research.

After completing her early education in Kenya and attending Medical School, Dr Osier admits she had pretty vague ideas about becoming a doctor and “developing cures for diseases like HIV,” when she started her medical internship at the Coast General Provincial Hospital in Mombasa, Kenya. Following her medical training Dr Osier was offered a post to study general paediatrics at the KEMRI-Wellcome Trust Programme in Kilifi, where she first developed an interest in research.

Dr Osier is now building a small research group at the KEMRI Centre for Geographic Medicine Research in Kilifi, Kenya, focusing on identifying the targets and mechanisms that underlie acquired immunity to malaria. She is also committed to capacity building for African scientists.

“My vision is to see an effective malaria vaccine made freely available to the poorest communities in rural Africa. I hope to remain in Africa, working to develop solutions to pertinent health issues facing the continent, and training the next generation of researchers to carry the mantle,” Dr Osier says.

While achieving balance between her busy work schedule and home life can be a challenge, Dr Osier says she manages by being as effective as she can during working hours, and saving after hours and weekends for quality time with family.

“At times in my career I have had to live away from my family while undertaking training overseas. I found this particularly difficult when I decided to take a toddler with me, without any additional support. I salute all women out there who take on family and work at the same time,” she says.

While there have certainly been challenges along the way Dr Osier considers herself lucky to have had “excellent mentors” throughout her career.

“My first mentor was Professor Charles Newton, who guided me through clinical research. Subsequently, I switched to basic science research where I have received long-term mentorship and inspiration from Professor Kevin Marsh. During my training I have also been mentored by Professors Anthony Scott, David Conway and James Beeson,” she says.

“These researchers have enabled me to appreciate and internalise what it takes to succeed in a very competitive scientific environment, and have equipped me with the skills I need to do so.”