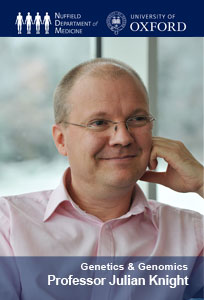 As the son of a successful nurse and doctor, it's no surprise that Professor Julian Knight took an early interest in medicine, but it wasn't until he started studying for his medical degree that Julian started to think about science.

His first taste of the lab came in his third year of pre-clinical training, when Julian was introduced to applied biology. While studying large mammal biology and insect ecology was about as far from the clinic as one could imagine, Julian found it interesting to learn more about how things worked. Taking on his first research project as an undergraduate, Julian became a prolific young researcher, leading scientific expeditions to Congo and Borneo, and then hunting for Lyme disease in Brazil for his clinical elective. While working as a house officer in surgical paediatrics, Julian also did a study on pain following circumcision, both from the patient and the parent's perspective.

After completing his clinical training, Julian took some time out to do a DPhil, and then went on to complete a four-year postdoc. He is now a clinical academic, an honorary consultant physician in general medicine, and a Principal Investigator running his own research group, which focuses on genetics and immunity. Julian says his biggest challenge for the future is to figure out how his work will have an immediate impact on patients. While current genetics is very strong on an academic level, Julian feels it has not yet been effectively translated into the clinic.

A father of three daughters aged 14, 12 and 10, Julian shares an equal role in childcare with his wife, who is also a clinical academic.

"My wife and I balance everything when it comes to making sure our home and work lives run smoothly. All of the girls went to the Julia Durban Nursery, which is across the road from work, so it was very convenient for us when they were younger. It can be challenging but our careers are flexible. If needed I can leave early to pick the girls up from school, and then catch up on things in the evening," Professor Knight says.

"When it comes to balancing work and home life; you do have to compromise your time. Certainly when the children were young, I had to really make sure I was there and being supportive. They're a little older now and are very resourceful bright individuals who make the most of all opportunities and benefit from each other's company and interactions."

"In terms of my career, I feel I've been given very good mentorship opportunities, training, and support at the University and within the Department. My advice to a DPhil student, about to embark on their career as a postdoctoral scientist or clinical academic would be to focus on getting a good publication record. Whether that means going to the best or most supportive labs, or even moving overseas for a time," he continues.